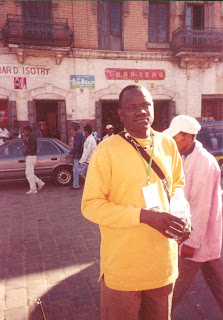 Every time i think of the tragic song that Sudan has become, my mind goes to my dear friend, Stephen Ochalla, artistic director of Kwoto Dance Institut in Khartoum, who to escape the ethnic cleansing going on at home against the 'black' Sudanese had decided to spend time learning and teaching dance in Amsterdam. A deep ideologue, Ochalla and his institut had been active on the political stage, using his theatre to mount campaign against the decimation of Sudanese of his hue by an obvious 'arabite' political elite led by soon-to-be-fugitivised President Omar. When the scene was becoming too volatile and discomforting for his kind of activism -- recall what happened to Ngugi Wa Thiong'o and his theatre comrades in Kenya of the Jomo Kenyatta and later Arap Moi time -- Stephen Ochalla was lucky to be helped out by the Dutch government through The Netherlands embassy in Khartoum to go cool off in an art academy in Amsterdam where he was teaching up till 2003 when we last met. Then he had been full of hope of returning home the 'next year' to continue his activism. I had expressed worry at the choice he was ready to make but Ochalla assured that even while he was stepping to 'relief'in Amsterdam, he had assured himself he had to return home as soon as he concluded his study. According to him, it was discomforting enough that he had to leave behind scores of friends and fans of his theatre and as well members of his troupe. 'I have to go back and join them', he had said. Yet he knew that his choice was fraught with danger. I knew that too. I have prayed ever since then that someday I would see the thick-built Ochalla alive; and on duty. I am still praying anyway.. even as Omar and his Janjamadness have gone completely naked into the market place. Stephen Ochalla, this is for you... still waiting for that promise of the rain.