A Song for my Acting Teacher 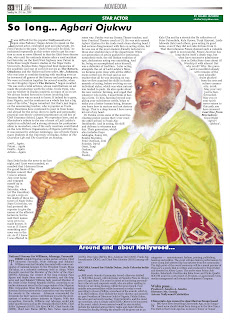 The road claimed a master of the stage. The shock of the violent death of my teacher, Femi Fatoba has become a deep wound on my heart... an endless stream of tears in my subconsciousness. It is harder to express it in words. Not because Fatoba, like every human, will not die but simply because he had to die the most undeserving death -- Road accident. And so the Road stole the dream in the broad daylight. I am still weeping in my the deep. Below is a tribute write up by MR SHAIBU HUSSEINI.


IT was difficult for the popular Nollywood actor Segun Aina Padonu ( Segun Arinze) to speak on the renowned actor, celebrated poet and playwright, Dr. Femi Fatoba in the past. ‘Uncle Femi can’t be dead,’ he exclaimed repeatedly as this writer tried to get his reaction as soon as news filtered in that the Ekiti-born theatre don, who until his untimely demise after a road accident last Saturday on the East/West highway near Patani in Delta State taught theatre studies at the Niger Delta University, Bayelsa State. Segun had fond memories of the academic and star of such hit movies as The Return, Oduduwa and the Hollywood best seller, Mr. Johnson, who was later to combine farming with teaching even as he traversed all genres of the literary and performing arts. We were on location together for several months, when we shot Kingsley Ogoro’s The Return,” Segun recalled. “He was such a total artistes, whose contributions on set made the production worth the while. Uncle Femi, who was my teacher in Ibadan inspired, so many of us on set. We always looked forward to scenes involving him because there was so much to learn. If indeed he is gone, then Nigeria, and the continent as a whole has lost a big man of the tribe,” Segun remarked. But that’s just Segun on the unassuming teacher, who is popular as Uncle Femi. Reactions have continued to pour in from home and abroad for the jovial, down to earth and personable practical cum theory oriented practitioner an old boy of CMS Grammar School, Lagos. We reproduce here, and as Moviedom’s tribute to the star of most of Ladi Ladebo’s exploit on celluloid and a strong advocate for professionalism in moviedom, one of the early reactions contributed on the Arts Writers Organisation of Nigeria (AWON) site. It was penned by Jahman Anikulapo, one of Uncle Femi’s many students at the University of Ibadan, Editor of The Guardian Life and The Guardian on Sunday.


Sam Dede broke the news to me last night, and I just went numbed, so numbed that I detoured from the grand finale of the Naijazz concert that I was to attend. Just went home and wrapped myself up in sleep. On Saturday, when (at The Guardian) we got a copy on the death of three lecturers of Niger Delta State University, we had pestered the reporter to give the names of the affected lecturers, but he said their names were yet to be made known. It was as if I knew something ominous was in the air. As if, I knew I was affected in some way. Fatoba was my Drama Theory teacher, and later Practical Theatre coach at UI. He was nick-named Agbari Ojukwu for his trade mark clean-shaving head. I had serious disagreement with him on acting styles, but he was one of the most student-friendly lecturers in those star-studded days of the department. While our generation of actors pushed for instinctual, naturalistic style, the old Ibadan tradition of epic, declaratory acting was unyielding. And he, being an accomplished actor himself, was a defender of tradition. Later acting alongside the set of Ladi Ladebo’s films, we became quite close with all the differences sorted out. He had said as our teacher that all he was insisting on was that we first acquired the skills in fundamentals of acting, before evolving on our individual styles, which was what naturalism tended to push. He also spoke about his new venture: farming, and urged that whatever I do in life, I must think of having a farm. To him, farming beyond supplying your subsistence needs, helps to make you a better human being, because you learn how to nurture and not destroy things. That is a deep lesson I have never let out of my head.
Dr Fatoba wrote some of the most fascinating pidgin poems that I ever read; the other person is Frank Aig-Imokhuede. And in acting, his skill and delivery is winsome any day. Their generation, which also includes Dapo Adelugba, Sonny Oti, Sumbo Marinho, Femi Osofisan, Jimi Solanke, David Oteri, Tunji Oyelana, Chris Nwobi, Kalu Uka and by a stretch the Ife collectives of Peter Fatomilola, Kola Oyewo, Tunji Ojeyemi, Laide Adewale (late) and others, gave acting its good name, even if they did not rake fortune from it.
That that infamous Patani claimed such a valuable spirit is most painful. Patani Junction has long shown itself a death trap, but what have successive administration in Delta State done about it? Worship it with silence! But why 2008? Why: the graveyard is mouthful already with remains of the most adorable fruits plucked from the arts and culture community. 2008, May your very 31st be fast-forwarded. May you or your spirit never return to this path you have smeared
Last line from Moviedom: Good Night ‘Agbari Ojukwu’.
Personal Stories