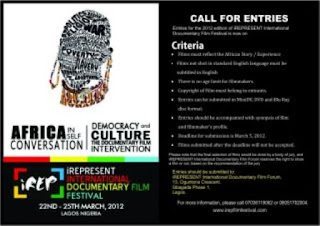 We formally extend invitation to you to participate in the 2012 iREP Documentary Film Festival, slated for March 22-25, 2012.  We invite you to propose any of your films that you deem related to the theme of the festival, Democracy and Culture: The Documentary Intervention for screening during the festival (see attached poster).

Conversation during the festival will also be focussed on this broad theme; and we request that you participate as a speaker/discussant.

Prof. Jean-Paul Colleyn, director of Institute of African studies, Paris, has agreed to give the KEYNOTE as well as conduct a MASTER WORKSHOP during the Festival.

The Workshop session and a segment of the Conference will, however, consider the potentials of the Nigerian films as presently constituted to -- in their production scheme -- explore and exploit the documentary format in its production virtues; hence the workshop is schematised under the generic theme, IS NOLLYWOOD DOCUMENTARY? The idea is also to explore the potentials and possibilities of theNollywood movies to spur the vocation of documentary film making in Nigeria.

The unfortunate situation in the Nigeria polity has grossly undermined the economic prospects of the country and consequentially frustrated our ability to raise fund for the purpose of the festival, but we are resolved to proceed with our plans even as we continue to strive to get the support of potential supporters for the project.

Kindly let us know if you would be available to participate at the festival on the mentioned dates.