Day the gods filled the bowel of British Museum

June 07, 2010
The 'god's filled the bowels of the Museum in their voluminous robes that spread endlessly at the helm. Their hosts dressed smartly in suits of varying colours looked understated beside the huge, fat attires of the 'gods' of Yorubaland represented by their scions -- the Kings and chiefs drawn mostly from the cradle, where the collections of sculptures and busts dating back to an ancient civilisation had been sourced. The 'gods' did not travel light, they were hemmed at the sides by their dazzling Queens, who even appeared more resplendent. In those gynomous robes, the Kings and Chiefs and Queens and their acolytes made light the heavy pang of cold that had descended on chilly London. Were they to be equipped to speak the god-souls in the beautiful cases upstairs in the gallery space would have screamed ' we love this lavish honour' bestowed on us. But would those encased pieces of civilisations have wished to return home to be eternally (?) dumped in dusty, dingy bowls and shelves? That is hard to tell... but in those expensive, well decorated and lit cases, they looked really regal --- they had rooms to smile generously; quite unlike those smelly shelves at Onikan. Yet, home is the best rest-place for the souls of the ancestors entrapped in each of those pieces of civilisation. 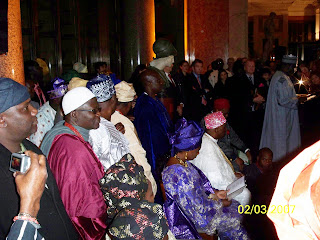 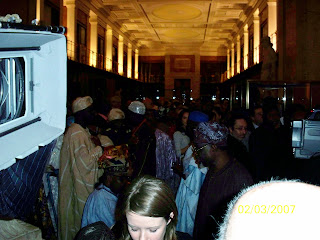 • A Panoramic view of the reception hall